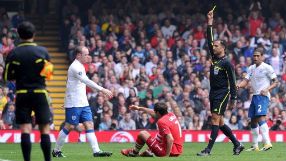 Rooney, making his 70th appearance for England, was booked for a reckless 37th minute tackle on Joe Ledley but had no idea that meant he would miss the next qualifier having also been booked against Montenegro at Wembley in October.

Asked if the yellow card frustrated him, Capello told reporters after the game at the Millennium Stadium: "I just told him, and he said, 'What, why? He was surprised.' He didn't remember he was booked before."

Rooney is eligible for England's friendly with Ghana at Wembley on Tuesday but Capello is expected to field a completely different side from the one that brushed Wales aside on Saturday after early goals from Frank Lampard, with a penalty, and Darren Bent, killed off the match as a contest.

Capello, though, still praised Rooney's hard-working performance and also said he was delighted with all his team, especially midfielder Jack Wilshere and winger Ashley Young.

"Wilshere's performance during this season has been incredible. He has improved so much in such a short time. He played like a player of 28 or 29 with 30 or 40 caps. I hope he will keep on improving."

"All the players played well, it was a different formation, but it worked well."