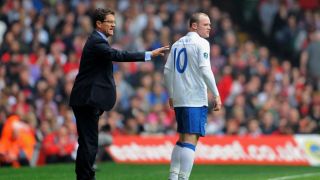 England's record goalscorer Wayne Rooney has conceded that his time playing under Fabio Capello's management for the national team ranked as a significant disappointment.

Rooney's 50th England goal against Switzerland in last month's Euro 2016 qualifier at Wembley lifted him above Bobby Charlton - the former Manchester United great who had held the record since 1968.

Speaking to the BBC in a documentary to mark the achievement, Rooney paid tribute to Sven-Goran Eriksson, under whom he made his debut for the Three Lions, and current boss Roy Hodgson.

But he reflected less fondly on his time under Capello - a towering figure of European club management from his decorated spells with AC Milan and Real Madrid.

Capello partially restored England’s fortunes after they failed to reach Euro 2008 during Steve McClaren's much-maligned tenure, qualifying for the 2010 World Cup but overseeing a shambolic campaign in South Africa

"The time I've enjoyed playing for England most was under Sven and now under Roy Hodgson," he said

"The one I’ve been most excited about was Fabio Capello because of his record when he came in.

"Yeah [it was a disappointment]. I expected a bit more."

Rooney expressed regret over criticising England supporters to a television camera after the lacklustre 0-0 draw against Algeria in that tournament.

"It's a bad point in terms of how we performed as a team and how I performed personally," he said.

Currently captain for Manchester United and England, Rooney is perplexed by his failure to hit the heights at major international tournaments since his stunning breakthrough performances at Euro 2004 - expressing particular disappointment that England failed to progress past the group stage at Brazil 2014.

"I go into tournaments and I’m always confident," he said. "For some reason it hasn’t happened. I don't know whether I put too much pressure on myself.

"The last tournament was disappointing. As it was, in terms of my own fitness, I felt as good as I have in a tournament.

"It was just a shame that as a team we didn’t go further."

Rooney identified Steven Gerrard as the best England team-mate he has ever played with and reserved special praise for another former captain, David Beckham.

"He helped me a lot during my early days with England."

Rooney added: "I loved playing with David Beckham - as a striker you know you can make a run and he’ll put in on your head or into space for you."