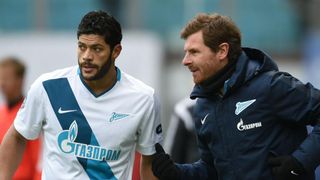 Leonid Slutsky's men had been prominent title challengers up until a few weeks ago, but a third consecutive league defeat sees them fall 12 points off the pace.

Igor Kireev's goal just before the hour settled things at the Stadion Zvezda as the hosts bolstered their survival chances, while CSKA's defeat sees them slip four points off second-placed Krasnodar.

Oleg Kononov's side are now front runners for the second UEFA Champions League place after they prevailed in Saturday's 3-2 derby win against rivals Kuban Krasnodar.

Kuban led 2-1 going into the final half hour, but Roman Shirokov and Vitali Kaleshin turned the game on its head, with leaders Zenit held by Rubin Kazan a day later.

Hulk's second-half penalty salvaged a 1-1 draw for Andre Villas-Boas' side, who had Domenico Criscito sent off with 32 minutes remaining.

Despite dropping points at home, the Portuguese was more irked by refereeing decisions, telling reporters: "In my opinion it is getting harder and harder to win, our players do not have any kind of protection.

"Hulk never receives any calls even though he is getting fouled all the time.

"I am not happy with the quality of the referee but either way we had chances to win even with 10 men."

Goals from Douglas and Kevin Kuranyi gave Dinamo Moscow a 2-1 home win against Mordovia Saransk, while Rostov moved out of the bottom four with a 2-1 win over Spartak Moscow - Maksim Grigorjev scoring a brace.

Dmitry Alenichev's men are out of the automatic relegation spots thanks to Vladimir Korytko's first-half goal in their 1-0 win at Ufa - the hosts still firmly embroiled in the relegation picture. Torpedo Moscow's clash with Terek Grozny ended goalless.