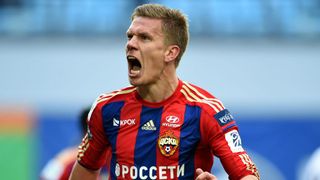 The sides remain in danger of the drop but victories on Monday make the league picture much more positive, with Arsenal putting another nail in Amkar Perm's coffin as a result.

The visitors left it late against the division's bottom side, with Dmitri Smirnov scoring in the last minute at Stadion Zvezda.

It brought his side out of the bottom four although that proved shortlived as Rostov too secured a third consecutive victory to take them 12th.

Vitaliy Djakov's 78th-minute penalty gave Kurabn Berdyev's men the victory over Torpedo Moscow while Ufa moved out of the bottom two with a 1-0 win over Lokomotiv Moscow.

At the top of the table, a point apiece for the leading four sides keeps things largely as you were, with leaders Zenit staying eight points clear at the summit.

"We always lose two points in these situations because we are only ever playing to win," explained Villas-Boas.

"But they are a tough opponent. So I will say again that we are not happy and are waiting for the next game."

CSKA Moscow and Krasnodar shared the spoils at the Arena Khimki after Pontus Wernbloom looked to have ensured CSKA's first league win in four matches.