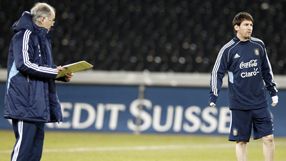 The midfield needs addressing given Sabella cannot count on Juan Sebastian Veron, captain of the Estudiantes side that won the Libertadores Cup in 2009, because the 37-year-old is set to retire in June.

There is a also question mark over Boca Juniors' ageing playmaker Juan Roman Riquelme, not discarded but who last played for Argentina in October 2008 and was overlooked by Sabella's predecessors Diego Maradona and Sergio Batista.

"Argentina are in the midst of a generation change, which happens to all national teams when there are a lot of young players coming through and we have to strengthen from the middle to the back, that's our search," Sabella told Reuters in an interview.

"Everyone is aware of the great potential we have in the last 30 metres of the pitch," he added, knowing he has plenty of skill up front with the likes of Messi, Sergio Aguero, Gonzalo Higuain and Carlos Tevez.

Argentina's last major trophy was the Copa America in 1993. If they are to win their third World Cup in the land of their greatest rivals, Messi will have to be at his peak at 26 and be surrounded by a good team.

"Of course, our dream is to do a good job, play the qualifiers, qualify for the World Cup and get there at the right moment because it's very important if you're at a World Cup to be in your best form," Sabella said.

"But there's a long way to go and I don't like skipping stages or times," the 57-year-old added at the Argentine Football Association's training complex on the outskirts of the capital.

Argentina must get through a gruelling qualifying campaign spread over three years with Ecuador their next opponents on June 2 in Buenos Aires, where they will be defending first place in the nine-team group which they hold jointly with Uruguay and Venezuela.

A week later they have a bye which they will spend playing Brazil in a friendly in New York.

There are no worries about world player of the year Messi, who has not always shone on the international stage unlike club football.

Sabella named him captain on taking charge last August and has praised Messi for the qualities the player shows almost on a daily basis with Barcelona.

"He has that great virtue that, over and above his great ability, he has that goal-scoring instinct which means he can beat players so often with the ball at his feet and also has the desire to put it in the net which makes him an extraordinary player," Sabella said.

Preparing a team around Messi, as Carlos Bilardo did with Diego Maradona to win the World Cup in Mexico in 1986, is the hard part having inherited a squad low on confidence after a disappointing Copa America on home soil last July.

Like his predecessors in the last decade, Sabella picks his squads largely from the elite of Argentine players based at European clubs.

"In recent Argentine teams the majority of the players played abroad in domestic competitions of a slightly higher standard than in Argentine football, a bit more competitive, more demanding