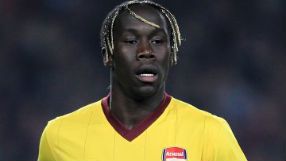 The Gunners were knocked out of Europe for the second successive season by Barcelona, after two goals from Lionel Messi and one from Xavi doomed the North Londoners to a 3-1 defeat.

The match wasn’t without controversy, however, as Robin van Persie was sent off while the score was still 1-1 which sparked post-match complaints from both manager Arsene Wenger and the player himself.

Sagna would prefer Arsenal to now focus on their crunch FA Cup Quarter-Final clash at Old Trafford on Saturday to compensate for their loss in Spain.

"It is a big blow to us, to be honest the referee has made a mistake, Van Persie's dismissal was a bit soft, especially when he was already on a yellow card,” he said.

"We will be back again in that competition, Barcelona played well but to be honest when we scored the equaliser I could see them panicking.

"The red card was a boost for them and our downfall, but we need to regroup before going to Old Trafford on Saturday, a big game against the league leaders in the cup.

"If we can get a good result there we will compensate the loss here. We are very unlucky in the sending-off."

And Sagna insists playing against United so soon after their European disappointment can work in Arsenal's favour and has reassured fans that the team will fight to bring silverware to Emirates Stadium.

"We can learn a lot from Barcelona - they kept playing as a team, kept passing the ball quite well. We have to think about the way they played and it must be an inspiration," he said.

"We have to be strong because we want to be successful. We have to fight for the team, for the fans and everyone. We want to bring something back to Emirates Stadium and so we have to think about the next game.

"The good point is we don't have time to think about what happened. We just want to train as hard as we can and give the maximum. We are ready to fight because we are even more frustrated after what happened last night and we want to give more.

"It will be another big game on Saturday. We just want to go there and play our football."