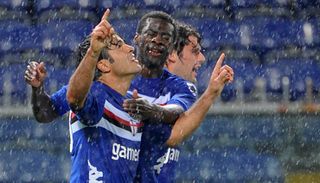 Goals from Eder, Lorenzo De Silvestri and Mauro Icardi were enough to beat Juve who opened the scoring in the 25th minute through Fabio Quagliarella and were also on target in stoppage time through Emanuele Giaccherini.

Sampdoria, who regularly flirted with the drop, are 14th on 42 points while Juve have 87 points at the top of the pile.

Sampdoria levelled when a soft penalty was given against Giorgio Chiellini for a foul on Icardi and Eder converted the spot-kick in the 31st minute.

Antonio Conte's side began the second half as strongly as the first but Giaccherini and Simone Padoin missed excellent chances.

The home team then hit them with a sucker punch after 57 minutes, centre-back De Silvestri heading the ball in after being left free at a corner.

Sampdoria added a third goal with 15 minutes to go when they produced a quick break led by Marcelo Estigarribia who set up Icardi for a scuffed finish from close range.

Juve thought they were back in the game two minutes later when Andrea Gervasoni awarded a penalty for a foul on Quagliarella by Shkodran Mustafi only for the referee to change his mind.

Giaccherini pulled an injury-time goal back for Juve who lost striker Nicklas Bendtner to a nasty-looking injury to his left arm after he fell awkwardly.