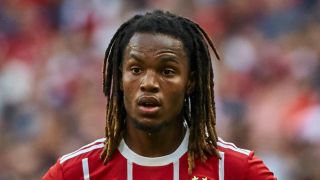 Renato Sanches is pushing for more Bayern Munich game time after failing to make an impact in his two years at the club, says new coach Niko Kovac.

Sanches flopped on loan at Swansea City as the Welsh club were relegated from the Premier League last term.

The Portugal international has struggled since joining Bayern for €35milllion from Benfica before Euro 2016, where he was crowned Young Player of the Tournament.

But the 20-year-old impressed in Kovac's first game in charge of Bayern, scoring a fine free-kick as the Bundesliga side came from behind to beat Paris Saint-Germain 3-1 in the International Champions Cup on Saturday.

"You have to keep in mind that when a player comes from a foreign country, you can not simply expect him to establish himself in a new environment in no time," Kovac told reporters.

"This is the same with any foreign player, you have to give the players time. I do not think that time was given to him and now he has this time.

"He came into training very motivated from the beginning, I've seen it every day for three weeks, he is really pushing and that's why I'm glad that he made a good game and scored a nice free-kick goal.

"You just have to give those people who come from elsewhere more time than they might need in this business."

Arjen Robben provided the cross for Javi Martinez's headed equaliser as Bayern struck three times in 18 second-half minutes to turn the tables on PSG and the Dutch winger also pleaded for patience with Sanches.

"I think you do not have to talk too much about that [Sanches' time at Swansea]," Robben said.

"You should give him enough time to develop. The club tries to help him. Hopefully he will continue as before."

Sanches has also impressed team-mate David Alaba with his attitude since returning to Bayern from his injury-hit spell at Swansea.

"He works very, very well, you can see that in the training sessions," said the Austria international.

"You realise that he works very concentrated - and that expresses itself of course in the game."