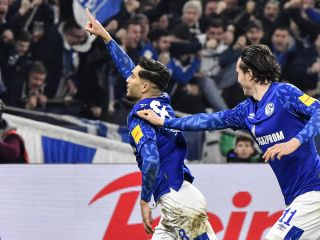 Borussia Monchengladbach’s Bundesliga title hopes were dealt a blow as they were beaten 2-0 at Schalke.

Marco Rose’s side remain two points behind leaders Leipzig, who play their first game after the Bundesliga’s annual winter break at home against Union Berlin on Saturday.

Schalke, who leapfrogged Borussia Dortmund into fourth place, spurned several first-half chances in front of a 62,271-crowd at the Gelsenkirchen Arena, but took the lead early in the second period through Serdar’s thumping finish from outside the penalty area.

Gregoritsch struck for Schalke again soon after with a neat finish from inside the area into the bottom corner.

Former Huddersfield boss David Wagner’s side have lost only one of their last 10 league matches.

In LaLiga, Getafe got their Europa League qualification hopes back on track with a 3-0 win at lowly derby rivals Leganes.

Getafe, who climbed above Valencia and Real Sociedad into fifth place, scored all their goals in the first 33 minutes through Leandro Cabrera, Allan Nyom and Jaime Mata.

Cabrera and Nyom both struck with headers and Mata converted from close range before the interval.

Leganes were unbeaten in four league games heading into the match but remain second from bottom in the table, one point from safety.