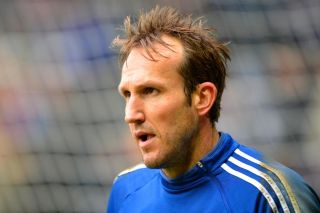 The veteran goalkeeper was unexpectedly called into action in the 18th minute in Vicente Calderon on Tuesday after Petr Cech fell awkwardly in an aerial challenge and suffered a suspected dislocated shoulder.

Schwarzer coped well under pressure, as Atletico dominated possession against a Chelsea side content to get men behind the ball and defend from deep.

Cech's injury was one of a number of setbacks for the London club ahead of the second leg next week, with captain John Terry also taken off injured with an ankle problem, while Frank Lampard and John Obi Mikel will be suspended for the return clash after picking up yellow cards during the second half.

On being called into action from the bench, the 41-year-old explained it was part and parcel of being a goalkeeper.

"There's not much to think about," he told ITV. "It happened so quick.

"It's a tough thing to do, but I had to go out there and try to do my job.

"Everyone was right up for it, which you would expect. We knew if we matched their determination our quality would come through.

"OK, we didn't create many chances but it was a good performance."

Defender Cesar Azpilicueta, who made a brave block from Diego Costa in the first half, echoed the sentiments of his Chelsea team-mate.

"It's a positive result," he said. "We knew it would be a difficult atmosphere.

"We fought hard and tried to keep the ball but the important thing is that we have the second leg at home.

"The players we will be missing are very important but we will fight to win."