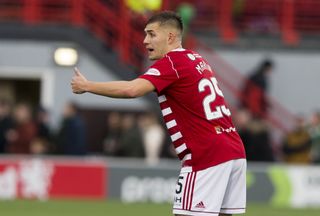 Scott Martin insists Hamilton will be going all out again to confound their critics this season.

The 23-year-old midfielder believes there are many who would like to see Accies out of the Premiership.

Ahead of the trip to Celtic Park in the league opener on Sunday, the former Hibernian player insisted that any negativity towards the club, who were second bottom when the league was called early last season due to the coronavirus crisis, will be used by Brian Rice’s players to ensure another season of survival in the top flight.

He said: “You see it all the time.

“Nobody really likes us in the league. So we use that as motivation.

“But we will always be fighting. The results sometimes aren’t the best but we never give up, we never try to fight to the last game and it will be the exact same this season.”

Skipper Scott Brown scored a late winner for Celtic when the teams met at Parkhead last December, just when it looked like Accies would escape with an unlikely point.

Martin believes the fans drove Celtic on to snatch the winner that night as he noted that there will be no supporters in the stadium this time, due to coronavirus restrictions.

“I always revert back to the game we played last season, the Wednesday night game. We were really good but they got a last-minute goal.

“Instead of the fans booing Celtic or whatever, the fans got right behind the team and they go up and score. If the fans weren’t there, who knows?

“So if there is going to be an advantage it is going to be towards us but at the end of the day they are still the best team in Scotland for a reason, they will be professional enough to get up for it.

“We need to take positivity from games like that but it is still last season and we have to do it again, set that standard again.”