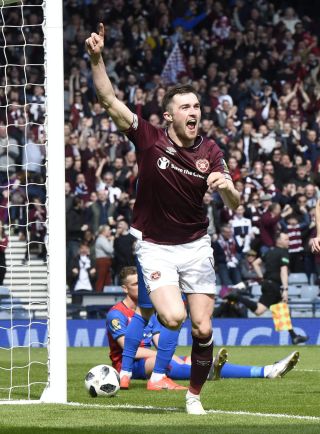 It is almost six years since the Jambos faithful were left to fear for the future of their club as former owner Vladimir Romanov’s chaotic Tynecastle reign crumbled.

The combined efforts of fans group the Foundation of Hearts and current chairwoman Ann Budge rescued the club and since then the new Hearts hierarchy have poured every effort into getting the club back on its feet.

Promotion was claimed at the first time of asking after the financial implosion saw the team relegated to the Championship, while a new main stand has been constructed to ensure the club’s existence in its Gorgie heartland is secure.

Now Hearts stand on the brink of landing their first major trophy since the famous 5-1 Scottish Cup thrashing of Hibernian in 2012.

Triple treble-chasing Celtic stand in their way in Saturday’s final, but defender Souttar says victory would finally allow close the book on the club’s turbulent recent past.

“The Scottish Cup is the big one for this club and with what it’s been through, it would cap off the recovery from administration,” said the Scotland centre-back.

“A lot of people at the club deserve to see something like that and it’s up to us as players to bring it home.

“Looking back, we all saw how close the club was to the end.

“For it to now be back in position where it could win the Scottish Cup in a proper way is brilliant.”

Neil Lennon’s Hoops will walk out on the slopes of Mount Florida, having chalked up their eighth straight Ladbrokes Premiership title.

But for a while it was the Jambos support who were dreaming of league glory after seeing their team win eight of their first 10 games.

A spate of injuries put the brakes on those hopes and Craig Levein’s men ultimately trudged home in sixth place.

But lifting a trophy this weekend would be enough to satisfy Souttar.

He said: “Will this game decide whether our season has been a success or not? Probably. Having started the season so well and making it to the League Cup semis, everything looked so positive.

“But if we win the Scottish Cup, I think most people would say that was a good season combined with a sixth-place finish.

“In everyone’s eyes we’ll be the underdogs, but we need to take belief from what we’ve done this season. We’ve been unlucky against Celtic in some games but done well in others.

“We’re working on a game plan, so hopefully it’ll be our day.”

Souttar just hopes he will not suffer like he did five years ago when his hopes of featuring in the final for former club Dundee United were dashed by then Tannadice boss Jackie McNamara.

Aged just 17, he was left on the bench as current Hearts team-mate Steven MacLean sealed a shock 2-0 win for St Johnstone at Celtic Park.

“I’m rooming with Macca this week and he’s mentioned that game in 2014 a few times already,” said the now 22-year-old. “He’s got different memories from me that day.

“I missed out in 2014 and it was tough. I played the semi-final against Rangers at Ibrox and was up against big Jon Daly, who’s assistant manager here now.

“It wasn’t easy then watching the final from the bench. It was even harder when we lost the game.

“I suppose that taught me you only enjoy these occasions when you’re out there winning them.

“I only found out I wasn’t starting on the day of the game. Was I expecting to start? Well I’d been terrible in one of the games leading up to the final so I put a doubt in the manager’s head and a doubt in my own.

“I was young at the time but to be part of the day itself was good, but now I know what to expect with the whole build up.

“This week’s game is certainly up there with the biggest of my career. These are the games you want to play in – big crowd, big occasion – and you’ve got to enjoy it when they come.”