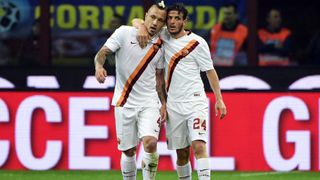 Roma midfielder Miralem Pjanic is desperate for his team to turn their form around and end their three-game winless run.

They travel to Sassuolo on Wednesday needing a turnaround in fortunes.

Juventus are almost certain to win the Serie A title, sitting 14 points clear, but Lazio (59 points), Roma (58) and Napoli (56) are all looking to finish second.

Pjanic urged his team to have belief in themselves as they push to secure a spot in next season's UEFA Champions League.

"We have to be aware of what's going on, we mustn't let this opportunity slip away, we have to get Roma as high up the table as possible, starting on Wednesday," the Bosnia-Herzegovina international said.

"We have six matches left to play and we'll give everything to collect as many points as we can and qualify for next season's Champions League.

"We have to believe in ourselves and go out there with a fierce will to win."

Goals have been a problem for Roma, with their 43 the ninth most scored in the league this season.

Juventus go into their clash at home to sixth-placed Fiorentina having lost two of their past three league outings.

But Massimiliano Allegri's men are cruising at the top of the table and meet a team that have suffered three straight losses.

Set for relegation, Parma visit second-placed Lazio, while Napoli will fancy their chances of a fourth straight league win when they take on Empoli on Thursday.

Under-fire coach Filippo Inzaghi's Milan, who are 10th, need a win when they host Genoa.

Milan have been ordered into an indefinite training camp after their 2-1 loss at Udinese, a defeat that stretched their winless league run to three matches.

Cesena and Atalanta meet in a relegation six-pointer.

Atlanta are seven points clear of the relegation zone, while Cesena sit 19th and eight points from safety.

Relegation-threatened Cagliari will be looking for a second straight win when they visit Chievo, while Palermo host Torino.

Udinese and Inter meet on Tuesday and fifth-placed Sampdoria are out to break their four-game winless league run when they host Hellas Verona.