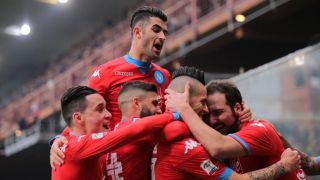 Gonzalo Higuain was on target again as Serie A leaders Napoli put 10-man Sampdoria to the sword in a 4-2 victory on Sunday.

Napoli coach Maurizio Sarri was accused of using homophobic slurs in a 2-0 Coppa Italia loss to Inter in midweek, but his side made headlines for the right reasons at Stadio Comunale Luigi Ferraris.

Higuain opened the scoring for his 21st league goal of the season and a Lorenzo Insigne penalty made it 2-0 after 18 minutes.

Sampdoria had fought back from 2-0 to draw in August's reverse fixture and Carlos Correa pulled one back before the break to spark hope of a similar revival.

But Mattia Cassani's red just before the hour halted their comeback and Marek Hamsik and Dries Mertens scored either side of Eder's goal to make it five straight league wins for Sarri's side.

Roberto Mancini was celebrating his 200th league game in charge of Inter, but they were held to a 1-1 draw by struggling Carpi at San Siro.

Rodrigo Palacio's first Serie A goal of the campaign put Inter ahead and a red card for Carpi's Lorenzo Pasciuti with seven minutes remaining seemingly ended the visitors' hopes.

But substitute Kevin Lasagna silenced the home fans with a cool finish in injury time.

Fiorentina subsequently leapfrog Inter into third as Josip Ilicic and Gonzalo Rodriguez scored in a 2-0 win over Torino.

Lazio's league revival continued as they made it six Serie A games without defeat in a 4-1 battering of Chievo. All four goals came in the last 24 minutes with Antonio Candreva scoring twice, a late red card for Stefan Radu the only sour note.

Palermo won by the same scoreline at home to Udinese to move six points clear of the relegation zone.

Rock-bottom Verona earned a 1-1 draw with Genoa, while Sassuolo were beaten 2-0 at home by Bologna.