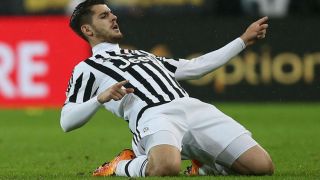 Goals from Leonardo Bonucci and Alvaro Morata sealed a 2-0 win for Juventus against Inter in Sunday's Derby D'Italia, moving the defending champions four points clear at the top of Serie A.

Bonucci gave Juventus the lead shortly after half-time in Turin, capitalising on a poor defensive header from Danilo D'Ambrosio to smash a close-range volley past helpless Inter goalkeeper Samir Handanovic.

Substitute Morata then secured a 16th win in 17 Serie A matches for Juventus by converting a penalty after he was fouled by Miranda with 10 minutes to go.

Massimiliano Allegri's men move further clear of their nearest Scudetto rivals Napoli, who are in league action at Fiorentina on Monday, as Juventus seek a fifth straight league title.

Fernando put the hosts into the lead a minute before the break and the points were sealed by Fabio Quagliarella, who scored for the second game in succession.

Lucas Castro's goal early in the second half handed Chievo a 1-0 home win against Genoa, with Rolando Maran's side climbing up to 10th place in the table as a result.

Udinese eased their lingering relegation fears with a 2-0 win over bottom club Verona at the Stadio Friuli, with Emmanuel Agyemang-Badu and Cyril Thereau on target for Stefano Colantuono's men.

Simone Verdi's penalty earned Carpi a 1-1 draw at home to Atalanta, who led thanks to Jasmin Kurtic's strike, while Palermo moved four points clear of the relegation zone with a 0-0 home draw against Bologna.