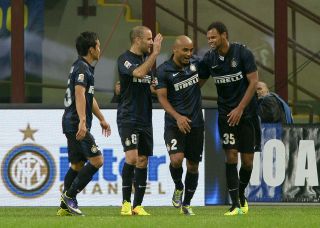 The visitors came into the match in a rich vein of form but horrific defending from a pair of early Inter corners saw Vangelis Moras deflect Jonathan's volley into his own net and Rodrigo Palacio bundle home.

Rolando scrambled a fourth as Andrea Mandorlini watched his side's set-piece defending fail them once more to render Romulo's fine strike a consolation.

Inter leapfrogged Verona to go fourth in the table and the night ended on a bizzare note as Moras and Ishak Belfodil were sent-off after full-time for an on-pitch scuffle.

The Genovese outfit were on the back foot for much of the first-half and Cristian Raimondi looped a header against the crossbar for Atalanta on the stroke of half-time.

But the half-time introduction of Savvas Gentsoglou galvanised Sampdoria and Shkodran Mustafi headed the decisive goal amid confusion.

Atalanta's Luca Cigarini tried to palm the ball off the line and was initially shown a straight red card before earning a reprieve of sorts when the referee's assistant gave the goal.

The visitors would eventually end up a man down when Constantin Nica scythed through Eder.