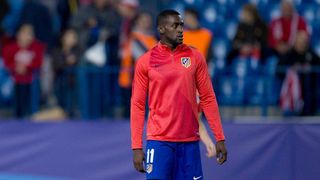 Diego Simeone believes it is only a matter of time until Jackson Martinez rediscovers his scoring form for Atletico Madrid.

Martinez joined Atletico from Porto for €35million ahead of the 2015-16 season but has failed to replicate his prolific displays with the Portuguese club.

The Colombian has scored just three goals in 20 appearances in all competitions this term, and recently confessed to playing "as bad as ever".

However, the Atletico coach is sure he will eventually rediscover his best form and is more interested in how he contributes to the team dynamic, rather than the number of goals he scores.

"The forwards live in front of the goal and have the need to score," Simeone said.

"What keeps me positive is that he has already experienced not starting well and growing, gradually, in other teams.

"What I value, more than goals, is his role in the team: that the rest can take advantage of their powers, although he would feel more comfortable with many more goals, of course."

Amid links of a move away from the Vicente Calderon, Juanfran suggested Simeone could emulate Manchester United's former coach Alex Ferguson and stay at the club for years to come.

The Argentine, however, is only focused on the short-term, a mentality which he believes has been the foundation of his success.

"I always think they can kick me out," Simeone said. "Based on that, I try to give absolutely everything that I have."