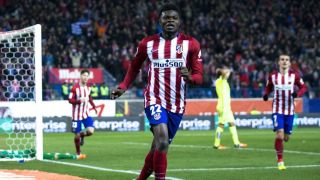 Diego Simeone hailed the impact of Thomas after the midfielder netted the winning goal as Atletico Madrid went top of La Liga with a 1-0 win over Levante.

Thomas - who set up the first goal in a 2-0 win over Rayo Vallecano last week - was brought on for Jackson Martinez in the 73rd minute after the Colombian missed a host of chances to break the deadlock and the newcomer duly made the telling contribution at Vicente Calderon.

Atletico had hit the crossbar three times but finally found the net nine minutes from time, Thomas surging into the box before his tame effort somehow crept under the arm of Levante goalkeeper Diego Marino.

Simeone's men are now two points clear of Barcelona at the summit after the defending champions were held to a 0-0 draw by Espanyol.

And Simeone said: "We struggled to combine during the first half – more for being overly-impulsive rather than how we were playing.

"After Thomas came on there was more fluidity to our game. This was an important game and a very difficult one but we're going home happy that we are up at the top."

The campaign reaches its halfway point next weekend, when Atletico will aim to maintain their advantage at the top by beating Celta Vigo.

"We've one weekend to go before we close the first round of games and our initial objective remains the same," Simeone added.

"We're battling because we can play better, we can be more effective, we can finish off our moves much better and elaborate our attacking moves better."

Thomas' goal was only his second for Atletico and the 22-year-old Ghanaian knows he has a long way to go before establishing himself in the first team.

"I'm still learning," Thomas said. "There are a lot of things which I still have to learn but with hard work, the minutes will come. I'm happy with things how they are."