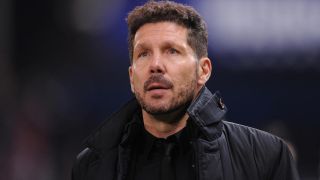 Diego Simeone has urged Nico Gaitan to use his performance against Guijuelo in the Copa del Rey as a catalyst to gain consistency for Atletico Madrid.

The Argentina winger arrived at Atletico for a reported €25 million fee from Benfica in June, but has found it difficult to make a telling impact in Spain so far.

Gaitan was making only his fifth Atletico start in all competitions as Simeone's men thrashed third-tier Guijuelo 6-0 and he played a key role in numerous opportunities, also setting up the second of Yannick Carrasco's two goals.

"It's the first time he has played where he wants to play, from the left," head coach Simeone told reporters.

"But we have Koke and Carrasco [who play from the left].

"We have difficult and beautiful competition for places [but], he proved that beyond his talent and speed that he has good reading of play with his peers.

"Hopefully he can keep up what he has shown and can respond like this whenever I call upon him to play."

Angel Correa was another of Simeone's talented deputies to start in attack for Atletico and the coach was impressed by the 21-year-old, who he believes is getting better and better.

"Correa's work rate is huge," Simeone added. "Every day he is getting stronger.