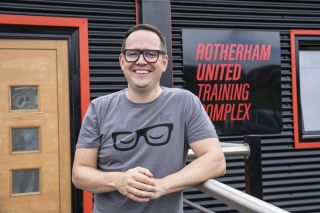 Sleep guru James Wilson says he cannot take the credit for the recent success at the clubs he has worked with.

But can it be a coincidence that Sheffield United, Rotherham and Lincoln have all enjoyed good times on the pitch, when Wilson has helped to ensure everything is peaceful off it – specifically during the night?

The sleep behaviour and environment expert, who is also known as ‘The Sleep Geek’, has gone into those three clubs and helped the players and staff with their nighttime habits and results have since spiked.

On the back of promotion from the Championship, the Blades are gunning for a Champions League place in the Premier League, Rotherham are top of League One having also been promoted from that league two years ago, while Lincoln are also in the third tier having come up from League Two last season.

It is at the Millers, Wilson’s hometown club, where he has done the majority of his work.

Boss Paul Warne has effectively made Wilson a member of his backroom staff and his players regularly discuss their sleeping habits and those of their partners with the expert.

Wilson believes the work he is doing has had an impact because the culture at those clubs is conducive to his methods.

“I could never say I am the reason why there has been success,” Wilson, who has appeared on numerous television shows, told the PA news agency.

“The manager at Rotherham has an open approach to emotional health of the players that includes their families.

“What I do is working at those clubs because of the way they are culturally. It fits in with the way those managers are.

“It is underpinned by the science of sleep, but that is the easy bit, the hardest bit is engagement. Can you go into a room of 25 people who probably haven’t really considered sleep before?

“Now when I am in Rotherham I am wearing a training kit, to make it like I am part of the team, so they can trust me.

“We see me as part of the team, my job is to help them with their sleep.

“Doing how I do it at Rotherham, I don’t think anyone has done it like that in terms of being in the club on a regular basis, working alongside the first team and looking at the coaching staff, the medical staff, the academy, the women’s team, the community trust.

“The idea is whoever is at the club is getting the best sleep they can so they are doing the best possible job.”

So what are the biggest sleep issues that footballers face?

Wilson says getting to bed after evening matches, regularly staying away from home and sleeping in certain positions are all problems he advises on.

And he has come up with a unique method to combat sleeping in an unusual environment, but reckons not all of the players will admit to using it.

“Sleeping away from home is difficult,” he added. “I advise taking your partner’s perfume with you.

“All of them take that advice but if you talk to them none of them will admit to doing to it in public.

“But it works, it makes you feel more secure. Sleep is not like nutrition where you do X, Y and Z and you know what will come out of it. Sleep can’t be forced. My job is to take that stress off them.

“There is a lot of stuff around Cristiano Ronaldo having five naps a day, Roger Federer has 10 hours every night, Serena Williams has 12 hours.

“If you understand what sleep is right for you then you are giving yourself the best chance of doing the best you can.”

Rotherham boss Warne has previously opened up about his chronic insomnia in the first few months of the job but Wilson has helped cure that.

More importantly to Warne, he has also made his home life much more bearable.

“He has helped some players’ wives who have struggled to sleep after childbirth, as we all know happy wife, happy life,” Warne told the PA news agency.

“He helped my Mrs, she struggled, so he saved my life as well.

“So in that respect he has definitely helped the club, because if I don’t sleep and my wife is unhappy then the lads are getting run!”

For more information on James Wilson aka The Sleep Geek please visit www.thesleepgeek.co.uk