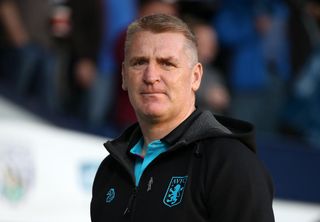 Aston Villa boss Dean Smith is out to silence Frank Lampard at Wembley after already hearing his words of wisdom.

The pair face off in Monday’s Sky Bet Championship play-off final when Villa clash with Derby in the £170million game on Monday.

They will be rivals in the battle for the Premier League but, when Lampard was working on his coaching badges at Chelsea, Smith invited him to Brentford, where he was manager, to speak to his squad.

He has already been impressed with Lampard the manager and Smith was interested with the former England midfielder’s motivational speaking.

He said: “I knew his old man, Frank Sr. I asked him if Frank wouldn’t mind coming in and doing a talk. He came in and did it for us.

“He just talked about his work ethic and how he got here from the days starting at West Ham and then going to Chelsea. He spoke about how he was always willing to try and prove people wrong, his dad for one.

“His dad put pressure on him, as all our parents do. They want you to be the best you can be. He’s certainly pushed himself to become the best he could.

“He has worked very hard to be at the top of his career as a player, worked hard as a coach too.

“He speaks very well about the game, understands the game and it does not surprise me he has done very well at Derby.

“You can see his passion and commitment. Him and Jody Morris have done a fantastic job there. Derby have been a regular in the top six over the last four or five years without getting promoted. He’s changed the squad an awful lot.”

But Smith has no plans to do anything similar this time as he believes he cannot get better than assistant manager John Terry, Lampard’s former Chelsea captain.

“He’s won everything in the game. He’s been at the pinnacle in his playing career as the captain of Chelsea, the captain of England and lifting the Premier League trophy five times,” he said.

“I don’t need to go and get anybody else in. I have players who have played here in the Premier League a lot as well, so it’s very important that we have the people here already.”