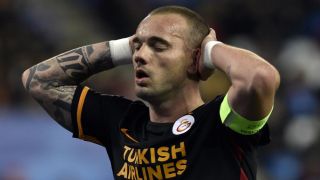 Wesley Sneijder is happy to remain at Galatasaray despite the club facing a possible ban from European competition, according to his agent Guido Albers.

Galatasaray are in danger of incurring UEFA sanctions after their Financial Fair Play case was referred to the governing body's adjudicatory chamber having "failed to comply with the break-even requirement during the monitoring period assessed in the 2015-16 season".

Sneijder has subsequently been linked to an exit from the Turkish side, with a big-money move to China touted as a possibility.

However, regardless of the decision, Albers says the Dutchman is happy in Istanbul and has no plans to leave.

"Sneijder is happy in Turkey. He will continue his career at Galatasaray," the agent is quoted as saying by Hurriyet.

"I have talked with the management, there is no offer from China for Sneijder.

"UEFA's decision related to Galatasaray does not affect his future at the club."