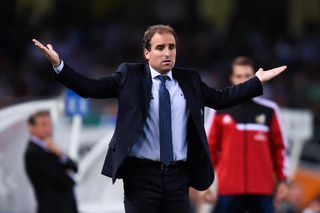 Arrasate conceded Sociedad had another "bad game" against Getafe on Monday but he thought their luck had turned when Pablo Hervias gave the home side the lead in the 82nd minute.

It was not to be, however, with Getafe's Abdoul Karim Yoda striking in the 90th and 94th minutes to steal victory for the visitors from Madrid, as Sociedad slumped to their fifth defeat of the 2014-15 La Liga season.

"This is a hammer blow for us, because the truth is we've had a bad game, but everything was still in our own hands by the 89th minute," Arrasate said.

"They got their equaliser and that was difficult to take but the winner was the worst thing that could have happened for us."

Sociedad finished seventh last season, while they claimed fourth spot and a berth in the UEFA Champions League in 2012-13.

But the Basque club have struggled so far this term with their only win in the league coming against Real Madrid at the start of September.

There has already been speculation Arrasate will lose his job - with Sociedad president Jokin Aperribay having been forced to back his coach before the international break - but the 36-year-old tactician was under no illusions that wins must arrive soon or he will be unemployed.

"Obviously this was a tough blow and we expected to win today but fortunately next weekend we have another game," Arrasate said.

"Tomorrow we have to get back to work in training, prepare for the game against Cordoba and we've no time to look backwards. I'm still encouraged, even though today was a blow.

"It's a tough time for us all. For myself, the players and the president, but I'm sure we'll get through it.

"Obviously if things don't improve and we don't start winning, then there's always a limit and things come to an end.

"But we'll be trying to have a better game next Saturday and to win."