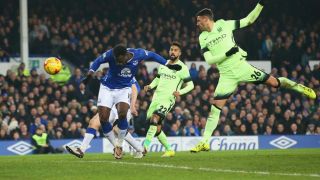 Graeme Souness expects Manchester City to face Liverpool in the final of this season's League Cup, even though he would love to see Everton make it a Merseyside derby at the Wembley showpiece.

City are 2-1 down as they prepare for their home leg against Roberto Martinez's side on Wednesday, but former Anfield boss Souness thinks they have the quality to overturn the deficit.

The winners will face either Liverpool or Stoke City in the final on February 28, with the Reds defending a 1-0 lead at home on Tuesday.

"I know Everton just went [to the Etihad stadium] and got a 0-0 draw, but no two games are the same and I just think Manchester City - with all the firepower that they have - will do it on the night.

"They will do enough to get past Everton. My heart tells me that I would like to see an all-Merseyside final, but my head is telling me Man City will get there."

Souness won the League Cup in four consecutive years as a Liverpool player and also managed Blackburn Rovers to glory in the 2002 competition.

He feels the tournament has increased in prominence and importance over recent campaigns as the top clubs jostle to win precious silverware.

Souness continued: "The Capital One Cup is no longer a very poor second in the cup competitions.

"Go back five or 10 years when it was pushed on the back burner, but in the last five years it has come to the forefront.

"The reason for that is you just look at the teams that the big clubs put out now. They don't rest the big players anywhere near as much as they used to."