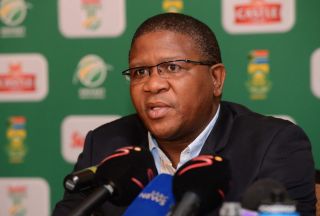 The outbreak of the Ebola virus in Africa has raised concerns over holding the tournament next year, with Morocco applying to the Confederation of African Football (CAF) for the event to be suspended.

CAF rejected that request, but have since asked the South Africa Football Association (SAFA) if they would consider replacing Morocco as host nation.

SAFA president Danny Jordaan was quoted by South African media at a press conference on Friday claiming that South Africa would not be hosting the tournament.

Those comments were subsequently backed up by Sports and Recreation minister Fikile Mbalula, who released a statement explaining that holding the event would not be feasible for the country.

"We have noted media reports relating to South Africa possibly hosting African Nations Cup in place of Morocco in January 2015," it read.

"It has been widely reported in the media that Morocco is alleged to have cancelled the hosting of the tournament on the basis of Ebola fears and that South Africa could step in as a host.

"We must put it categorically clear that SAFA has not approached the Minister with regard to this possibility.

"Nevertheless as the Minister also reiterated during interviews throughout this week, there are just too many factors to consider for South Africa if we are to host a tournament of this magnitude.

"Our major concern of course remains the cost implications of such a tournament when South Africa is currently grappling with its own fiscal challenges.

"A tournament of this nature, if planned outside the normal budgetary cycle, will require budgetary adjustments, a process that is currently not an option.

"The tournament, as is also a concern for Morocco and many other countries in the world, may also pose a challenge on how we can grapple with the Ebola challenge engulfing the continent at the moment.

"We will however await pronouncements from SAFA on this matter and respond factually once all facts are put before us."