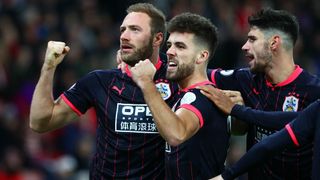 Laurent Depoitre cancelled out Charlie Austin's header as Huddersfield Town fought back to earn a 1-1 Premier League draw at Southampton on Saturday.

Austin continued his recent good run of form with his fifth goal in seven appearances - and fifth in his last eight outings against the Terriers - but the striker could face retrospective action from the Football Association for a late challenge on visiting goalkeeper Jonas Lossl.

Having nodded the Saints ahead midway through the first half, Austin was perhaps fortunate to escape punishment for drawing blood from Lossl's nose by leaving his foot in as the Dane gathered a throughball.

Southampton boss Mauricio Pellegrino invited speculation surrounding Virgil van Dijk's future by leaving the Netherlands defender out with the January transfer window looming and neither Wesley Hoedt or Maya Yoshida were close enough to Depoitre as he headed a second-half equaliser.

Depoitre's intervention extended the Saints' run without a clean sheet to 10 league games and it proved enough for the visitors to claim a valuable point, despite Yoshida giving them a scare by heading against the post in stoppage time.

FULL TIME: 1-1 A share of the spoils at St Mary's after Laurent Depoitre's second-half header. 23 December 2017

The last time these two sides met at St Mary's was a League One fixture in December 2010 but seven years on both clubs head into Christmas as part of a bunched-up bottom half of the top flight, Huddersfield three points ahead after rounding off a strong first half of the season following promotion.

Huddersfield came into the clash full of confidence following their 4-1 thrashing of Watford last week and Aaron Mooy - scorer of two goals in that win - had the first opening here, blocked by Steven Davis.

The visitors went even closer on the quarter-hour mark as Fraser Forster superbly tipped Christopher Schindler's header onto the crossbar.

Southampton gradually grew into the game and took the lead in the 24th minute as Hoedt headed James Ward-Prowse's corner goalwards where Austin was left unmarked to stoop and nod in from three yards.

Schindler headed wide from another excellent Florent Hadergjonaj cross before Austin's coming together with Lossl prompted no action from referee Lee Probert.

After lengthy treatment Lossl was soon called into action again, making a sprawling save at the feet of Dusan Tadic and then scrambling back to keep out Austin's chip following a charged-down clearance.

Austin ought to have doubled the lead on the hour but after Nathan Redmond rounded Mathias Jorgensen and squared the ball, the striker snatched his effort wide.

And that miss came back to haunt Southampton as within four minutes, substitute Tommy Smith delivered a cross from the right and Depoitre rose unchallenged to head home.

The personal battle between Austin and Lossl continued as, following a shanked clearance, the keeper parried away a fierce drive from the striker, who then limped off with a hamstring problem sustained in the act of shooting.

And Saints' frustration at seeing their winless run extended to six matches was summed up in the first minute of stoppage time as Yoshida's header struck the base of the right-hand post, ricocheted off Lossl and away to safety.