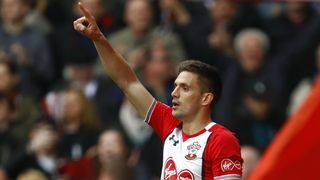 Dusan Tadic scored a potentially priceless brace as Southampton moved to within one point of safety with a crucial 2-1 win over out-of-form Bournemouth at St Mary's on Saturday.

The Serbia international made the visitors pay for a pair of defensive errors either side of half-time to snap an eight-game winless run in the Premier League, in the process securing a vital first home victory since November.

They are now within touching distance of 17th-placed Swansea City, who face a difficult home clash with Chelsea - the team that knocked Saints out of the FA Cup semi-finals - later on Saturday.

Southampton boss Mark Hughes had billed the visit of an out-of-sorts Bournemouth side as essential to making his side's remaining games "significant" and they can now look forward to the final three fixtures with some hope of escaping the bottom three.

Tadic made the key breakthrough by capping off a swift counter-attack in the 25th minute and, after Josh King punished some sloppy marking to restore parity on the stroke of half-time, the 29-year-old attacker popped up again to net the winner in the 54th minute.

The Cherries, now beaten in three straight matches, knocked on the door for a second equaliser in stoppage time but the impressive Alex McCarthy pulled off two crucial saves to ensure his side remain buoyant ahead of next weekend's match at Everton, which precedes a defining trip to Swansea.

Both sides shared an early sense for the gravity of the occasion as back-to-back attempts from Ryan Bertrand and Oriol Romeu in the 14th minute drew brave blocks from Steve Cook and Simon Francis.

Well-organised on that occasion, Bournemouth's defence went missing 11 minutes later as they left the door open from an attacking corner.

Saints did their defensive duty and sprang forward through Mario Lemina, who drew the lone defender and slipped a pass into Tadic's path for a simple finish.

They quickly set about doubling the advantage and found Asmir Begovic the only impediment, the goalkeeper producing a pair of fine saves from Nathan Redmond and the increasingly-confident Lemina.

But, just as McCarthy's sharp save from Nathan Ake seemed set to keep Southampton's lead intact at the break, they were made to pay for their own loss of concentration.

Francis rose to help a corner to the far post, where an unmarked King fired into the roof of the net.

Defensive errors had become the theme of the match and in the 54th minute it was Cook's turn to be the charitable party, the 27-year-old's poor chest control on the halfway line allowing Tadic to stride in on goal and stroke a classy finish into the bottom left corner.

Begovic, in contrast, was keeping the Cherries in the contest with 20 minutes remaining, first reacting well to stop a deflected Charlie Austin strike and then holding a good chance for Bertrand.

Bournemouth's struggles at the back almost gifted the third to substitute Shane Long and, though that opportunity went begging, they banked a potentially season-defining victory over their South Coast rivals courtesy of McCarthy's double save in stoppage time.