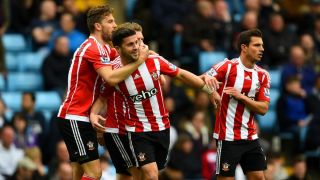 The striker scored his side's opening goal and then set up Dusan Tadic twice, with Sadio Mane adding a late fourth for Southampton, while Ashley Westwood scored both Villa goals.

Long impressed in a typically all-action display and the Republic of Ireland forward claimed Southampton could have scored more goals.

"I thought it was a good performance. We could have scored a lot more. We're happy with our performance," Long said.

"I thought we dominated the game for a long time in the first half, but then they put us under pressure. We had the quality to score a few more and we did.

"We're going for nine points out of our last three games and we hope other results go our way and we get into Europe."

The result moved Saints to within two points of sixth-placed West Ham, though they have played an extra game.