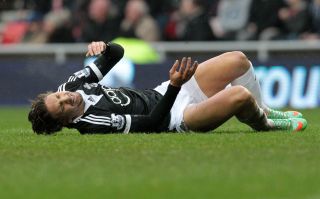 The Premier League club confirmed the nature of both players' injuries, which were sustained in Saturday's 2-2 draw at Sunderland, on Wednesday.

However, Southampton are reluctant to put a timescale on either player's recovery, unlike the Croatian FA who announced on Tuesday that defender Lovren was facing three to four weeks out.

A statement on Southampton's official website read: "Saints can confirm that Dejan Lovren and Gaston Ramirez both suffered ankle ligament injuries during Saturday's 2-2 draw with Sunderland at the Stadium of Light.

"The pair both flew back to Southampton with the rest of the squad on Saturday evening, and have since been recuperating at Staplewood.

"The players' injuries are still being assessed by the medical team, so we are reluctant to place a timescale on when the duo will be able to return to action.

"We will keep supporters updated on the pair's recovery and, as soon as we are in a position to comment on their anticipated recuperation time, we will do so."

Lovren and Ramirez were injured in quick succession at the Stadium of Light. Ramirez was hurt following a tackle by Wes Brown on the edge of the Sunderland area, with his team-mate suffering a similar fate after tangling with Craig Gardner when play switched to the other end of the field.