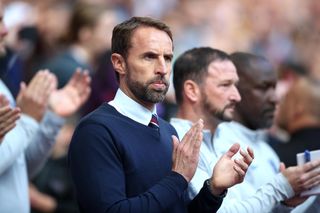 Gareth Southgate is relishing the headache brought by increased competition as England’s players look to stake their claim ahead of Euro 2020.

Next summer is shaping up to be one to remember, with the semi-finals and final among seven European Championship matches to be hosted at Wembley.

The tournament presents a great opportunity for England to follow in the footsteps of the heroes of 1966 World Cup by winning silverware on home soil and the side moved a step closer to sealing qualification with Saturday’s 4-0 win against Bulgaria.

Southgate somewhat surprisingly decided against experimenting with his starting line-up, but there looks set to be a fair bit of tinkering as players get the chance to shine.

“(It’s) very difficult to say because I think so many of our players are still on a handful of caps, so many of them are improving rapidly,” Southgate said when asked how close he was to deciding on his team for the tournament.

“The great thing is we’ve got genuine competition for places.

“We’ve got, clearly, probably four or five guys that you would expect to see on the team sheet, but outside of that (it’s) very difficult to call in a lot of positions – and the way that people progress over this season and the way that the new ones adapt to international football will determine so much.

“So ahead of the World Cup, this time, this sort of September, October period, I think (Kieran) Trippier only had one cap, I think (Jordan) Pickford had one perhaps. (Harry) Maguire we hadn’t played.

“So that was three that got to the World Cup semi-final who hadn’t played by this point ahead of the tournament and they all had outstanding tournaments for us, so I think we’ve always got to have that open mind.”

Southgate has proven to be open-minded, bold and forward-thinking in his decision-making as England manager, with experienced players moved on in his quest to evolve and improve.

Saturday saw substitute Mason Mount become the latest talent to be fast-tracked into the senior side as the Chelsea man made his debut, while Jadon Sancho came off the bench as the 19-year-old won his seventh cap.

“I think the most important thing to say is that we are not doing it for wallpaper – they’re in because they deserve to be in,” Southgate said.

“Mason’s performances already this season for his club and in training with us this week, then what he showed when he went into the game show that he’s a threat to the starting team.

“So, that is hugely encouraging for us in that you know that for a lot of these lads, their best years are probably three or four or five years away.

“I mean he’s still filling out physically as well so that’s great.

“Of course, we’ve got to get the balance right of keeping on winning matches and blood those players at the right times but, yes, English fans should be hugely excited when they see the likes of him and Sancho coming on and the impact that they can have already is.

“We love working with them because the mentality is good; it’s not just that they’ve got talent, they want to get better and it’s up to them how far they go.”

James Maddison and Tyrone Mings are the remaining uncapped players in Southgate’s 23-man squad after Aaron Wan-Bissaka returned to Manchester United due to a back complaint.

Team-mate Jesse Lingard followed suit on Saturday due to illness but there are no plans to call up any reinforcements ahead of the match against Kosovo in front of a sell-out St Mary’s crowd.