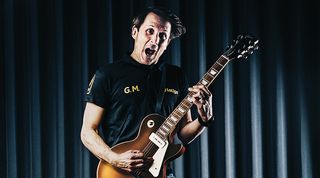 Gaizka Mendieta has told FourFourTwo that he wishes manager Gareth Southgate had been more honest with him as his playing career wound down at Middlesbrough.

The Spanish playmaker captained Valencia in successive Champions League finals in 2000 and 2001, losing to Real Madrid and Bayern Munich respectively, before costing Lazio €47.7 million to make him the sixth-most expensive footballer of all time.

After spending a year on loan at Barcelona, Mendieta then joined Middlesbrough and helped the Teessiders lift the 2004 League Cup; their first ever major trophy.

However, injuries limited the Spaniard to just eight outings in both the 2004/05 and 2006/07 campaigns, with Southgate hinting that he wasn’t in his plans.

Mendieta says his former team-mate should have owned up if he didn’t intend to play him.

Speaking in the June 2019 issue of FourFourTwo magazine, the 300th edition and our 25th anniversary special, he says: “That was a period when I didn’t like the way I was being treated by Boro and consequently by Gareth. He wasn’t honest with me.

“I felt like I was mistreated, training with the reserves. Why didn’t he play me? You’d have to ask him. I wasn’t happy and went to talk to him on a few occasions. He was never very clear with me.

“I saw Gareth at a charity match recently. He didn’t apologise but he did say, ‘If it was now, I’d do things differently.’

“That’s fine, although I’d have liked things to have been different at the time. I could have left and played for someone else.”

Read the full interview with Gaizka Mendieta in the June 2019 issue of FourFourTwo, a 25th anniversary special. We speak to Bournemouth boss Eddie Howe, who appeared in issue 5 of the magazine in 1994 as a Cherries trainee, about his and the club’s roller-coaster quarter of a century, and hail the 101 greatest players of FFT’s lifetime. Plus, we talk to Leicester playmaker James Maddison and Leeds defender Pontus Jansson, share some unseen Pele pictures, and meet YouTube’s maddest fan Mark Goldbridge.