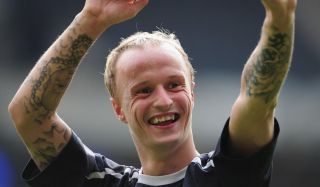 The 23-year-old - signed from Wolves in January - opened the scoring in the 12th minute of Saturday's clash with his first goal at Celtic Park, a volleyed effort from an Emilio Izaguirre delivery.

Charlie Mulgrew doubled the advantage with a delightful flick from a Griffiths corner 10 minutes later, before the man of the moment capitalised on some questionable defending to hit the hosts' third just short of the hour mark.

Kris Commons made it 4-0 12 minutes from time with his 18th goal of the season, but Griffiths had the final word as he slotted beyond Dean Brill in the Inverness net.

The victory, which equals the clubs biggest in the league this season, maintains Celtic's 21-point lead over second-placed Aberdeen, who picked up a 1-0 victory over 10-man St Johnstone.

Ryan Jack's 25-yard strike gave the hosts an early lead at Pittodrie, before substitute Steven MacLean was given his marching orders at the death for a second bookable offence.

Motherwell kept pace with Aberdeen by inflicting more misery on basement club Hearts with a 4-1 triumph.

James McFadden rounded off the scoring for Motherwell in the 74th minute - a deserved strike given he provided the assists for Iain Vigurs, Lionel Ainsworth and John Sutton's earlier efforts.

Struggling duo Partick Thistle and Ross County both dropped a position in the Premiership table as they played out a 1-1 draw at Dingwall, though a 20-point cushion over Hearts means neither should have anything to worry about.

Kallum Higginbotham drilled a free-kick under the the home wall to break the deadlock, before Richie Brittain pulled Ross level at the other end five minutes later.

That result opened the door for St Mirren to climb to ninth with an impressive 2-0 triumph over Kilmarnock.

The victory pulls Danny Lennon's men level on points with their opponents.