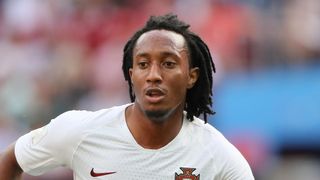 Sporting CP will demand compensation from Atletico Madrid over the LaLiga side's signing of Gelson Martins.

Portugal international Martins joined Atletico on a five-year deal after opting to leave Sporting, one of a number of stars to depart the club.

International team-mates Rui Patricio and William Carvalho are among the high-profile names to leave in this transfer window in the aftermath of an attack on the training ground by a section of the club's supporters following their failure to qualify for the Champions League.

Patricio's move to Premier League newcomers Wolves is being investigated by FIFA, with Sporting demanding €58.7million and the goalkeeper to be banned for six months.

And Sporting have issued a similar complaint to world football's governing body over Atletico's capture of Gelson, who made 31 league appearances last season.

"Faced with the unacceptable behavior of Atletico Madrid in the case concerning the athlete Gelson Martins, which we disavow, the board of directors of Sporting CP - which in this negotiation as in any other will only defend the superior interests of Sporting CP and not any others - decided unanimously to present a case to FIFA with compensation claim to the athlete and the club, and request of application of sports sanctions to both," read a statement released on Friday.