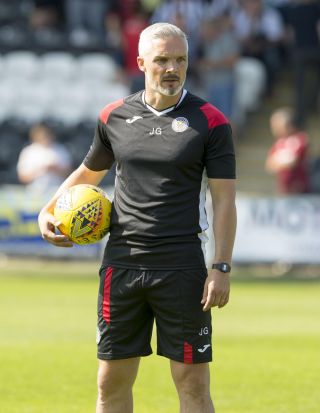 St Mirren boss Jim Goodwin bemoaned a lapse in concentration that cost his side in a narrow 1-0 defeat against Kilmarnock in the Ladbrokes Premiership.

The Buddies had the lion’s share of the chances during a dull Rugby Park encounter but lost out to Gary Dicker’s goal 12 minutes from time.

The Irishman was found unmarked from Rory McKenzie’s whipped delivery – something that frustrated his compatriot Goodwin.

“It’s a lapse in concentration at a set-play and unfortunately it’s cost us the game,” he said.

“I think the game was very even. I don’t think anyone could have argued it if had finished 0-0. I can never fault the players’ efforts. I think they were brilliant in terms of the game plan. Everything we had hoped for worked.

“Kilmarnock are very dangerous on the counter attack. They drop back in and have 10 men behind the ball and hit you on the break. I thought we managed that very well and (Kilmarnock striker Eamonn) Brophy was very quiet all afternoon.”

The Paisley side have now lost five consecutive league matches on the road and travel to in-form Celtic on Wednesday.

“When you see what Celtic have been doing to everybody who has gone there so far this season it is quite daunting,” Goodwin admitted.

“Hopefully the boys will recover well tonight and tomorrow, we’ll train again Monday and we’ll try and come up with a game plan that will stop Celtic doing what they do well.”

Kilmarnock manager Angelo Alessio praised captain Dicker after he netted his second goal in as many weeks. The midfielder isn’t known for his goalscoring prowess but he has now helped his side to six important points in the space of seven days.

“I’m happy for him,” the Italian said. “Now he’s our best scorer and in a good moment now. At the end of the game he played at centre-back.

“He’s our captain and a good example for all of the players here. I am happy for him, not only for the goal because I think his performance was very good.”

“Today we exploited the corner and Dicker scored the goal. I think it is important now that we improve some situations. Today was difficult because in attack we found it difficult to create chances. In other games we’ve created more chances.”