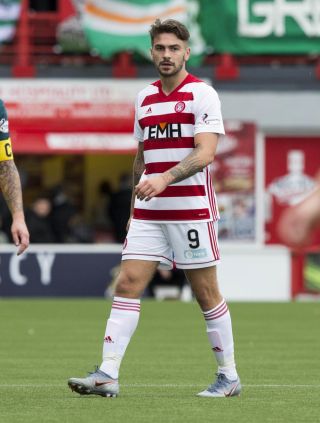 St Mirren failed to make their extra man count as they were held to a goalless draw by 10-man Hamilton.

George Oakley was shown a second yellow card by referee David Munro after 50 minutes but the visitors dug in to claim a precious away point.

Saints claimed for a penalty late in the first half when Junior Morias went down under a challenge from Brian Easton but beyond that struggled to break down Accies.

Manager Jim Goodwin made three changes from the side that lost to Ross County. There was a first start in his second spell at the club for Kirk Broadfoot, while Ilkay Durmus and Tony Andreu also came in to the line-up.

Hamilton made two changes from the team beaten by Celtic. In came Aaron McGowan and Marios Ogkmpoe, with Markus Fjortoft and Shaun Want dropping to the bench.

A minute’s silence was observed in memory of the former Rangers midfielder Fernando Ricksen who died earlier in the week.

The home side started in positive fashion and Kyle Magennis came close with a shot that ended up in the side netting. Morias then passed up a golden chance when he miscued a cutback from Paul McGinn.

Former Accies man Tony Andreu then could have scored against his former club but could not get enough purchase on his header to trouble Owain Fon Williams.

Saints then felt they should have had a penalty when Easton eased Morias to the ground but the referee waved away the claim. Accies then nearly netted with their first chance of the game right before the break but Oakley’s header from a corner went just wide.

Oakley, though, was not on the field for much longer. Just five minutes into the second half the striker was late on St Mirren’s Sean McLoughlin and was shown his second yellow card of the match. McLoughlin was not badly injured and was next to threaten for Saints with a long-range effort that went just wide.

Hamilton were happy for Saints to have the ball but the home side were struggling to do anything creative with it.

Goodwin looked to liven things up by bringing on Kyle McAllister and he set up a chance for Magennis but his flashing effort went just wide, before Saints failed to convert from a late corner that flashed across the box.