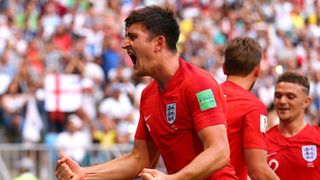 England crowned another goalscoring hero named Harry on Saturday, but it was Maguire, not Kane, who helped the Three Lions into the last four of a World Cup for the first time in a generation.

Not since Italia '90 and that penalty shoot-out heartbreak at the hands of West Germany have England been one win away from football's grandest stage.

But 28 years on, Gareth Southgate's young side have presented themselves with that opportunity following a 2-0 win in this quarter-final against a stubborn Sweden in Samara.

Tottenham striker Kane has hogged the majority of the headlines in Russia, rattling in six goals in only three prior matches, but on this occasion it was Maguire and the previously under-fire Dele Alli who proved the star turns with a header apiece.

Alli's effort to double the lead just before the hour sent the England fans behind that goal into full party mode - a sight which must have brought back fond memories for Maguire, who, then at Hull City, attended Euro 2016 as a fan along with his friends.

2 years ago watching in France with my mates. Now on the plane to Russia. How things have changed.  May 16, 2018

Two years on from that debacle in France, Maguire's rise is a microcosm of all there is to like about this team, who, following the lead of their manager, have impressed with their performances on the field and their demeanour off it.

Maguire met up with the same group after the win over Panama, recreating the photo, and those same pals will have been delighted to see him net his first international goal.

And what a time to score it, coming on the back of half an hour of largely ponderous England play against a side content to sit in and relinquish possession.

Sweden have never won a World Cup game in which they trailed at half-time, and they rarely looked like addressing that statistic here. Janne Andersson's side are supremely well drilled, but do not possess the pace or penetration to chase a game.

Having wreaked havoc in the opposition box - thumping in Ashley Young's left-wing corner with a header packing more power than most can generate with their feet, Maguire dealt with the considerable physical threat posed by Ola Toivonen and Marcus Berg with assured calmness.

Alongside Manchester City duo John Stones and Kyle Walker, he saw out England's first clean sheet of the tournament - a factor that will have pleased Southgate no end, after expressing his desire to see defensive improvements during Friday's pre-match news conference.

Maguire received a late booking for a foul on John Guidetti, and conceded a free-kick in a dangerous position soon afterwards, but they were rare blots on an otherwise assertive display.

For a long time, England fans have struggled to identify with the players pulling on the shirt and representing their nation. The likes of Maguire, a paying punter like the rest only two years ago, are changing that dynamic.