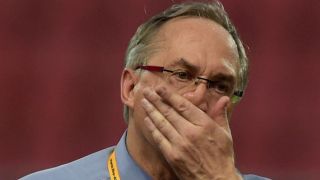 The Asian Cup finalists began their 2018 World Cup qualifying campaign with a routine victory in Bangkok on Tuesday, dominating throughout against opponents ranked 143rd in the world.

In the second period, Son's powerful free-kick from 30 yards went straight through the arms of the keeper and into the roof of the net, as South Korea made a positive start in Group G.

"If you look at the scoreline then you may think there was not a big difference between the teams," said Stielike.

"However, we dominated possession and had few problems at the back.

"We only had difficulties in attack, as we missed lots of chances and our passing was not what it should have been."

South Korea's next qualifying game comes at home to Laos in September, while Myanmar travel to Kuwait.