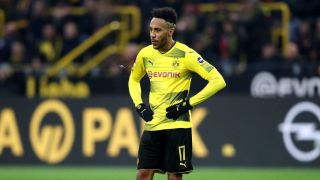 Pierre-Emerick Aubameyang could be included in Borussia Dortmund's squad for the visit of Freiburg despite Arsenal's interest in the striker, says head coach Peter Stoger.

It has been a turbulent few weeks for the Gabon international, who first incurred the wrath of the Dortmund hierarchy by missing a team meeting before the 0-0 draw with Wolfsburg.

He was handed an internal suspension by the club and has had his behaviour and attitude routinely criticised by Bundesliga pundits.

Reports of Arsenal's interest exacerbated the situation, with Aubameyang excluded from the squad for the trip to Hertha Berlin despite having been originally named in the travelling party, as the striker's focus was called into question.

Dortmund publicly revealed they had rejected a bid from Arsene Wenger's team and, with no further news on that front, Stoger expects to name Aubameyang in his squad.

"He trained well this week and left a good impression," Stoger told reporters at his pre-match news conference on Thursday.

"He has qualified himself for the squad at the weekend if he continues like that."

Dortmund will be hoping to avoid dropping points for a third Bundesliga game in a row when Freiburg visit Signal Iduna Park, a run of form which has seen them drop to sixth in the table.

And Stoger accepts that is not good enough for a team that views a Champions League place as the minimum requirement.

"Qualification for the Champions League is an absolute must for this team," Stoger said. "We know that sixth place does not meet our standards."