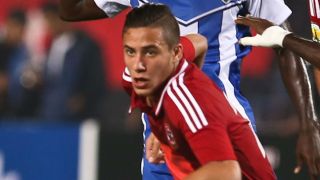 Stoke City have signed Egypt international Ramadan Sobhi from Al Ahly for a fee that could rise to €6million.

The 19-year-old, who Stoke claim to be "widely regarded as the most exciting prospect in African football", becomes the club's first signing ahead of the 2016-17 Premier League season.

Chief executive Tony Scholes said: "We are absolutely delighted to have signed a player of Ramadan’s undoubted quality and potential.

"He’s a special young talent who is excited about the prospect of making an impact in the Premier League and we’re looking forward to giving him that platform."

Sobhi, capped six times by Egypt, is set to meet his new team-mates in Orlando later this week once his UK visa comes through.