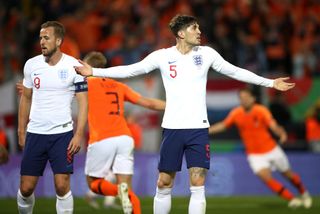 Stones took too long as he tried to play the ball out from the back during extra time, with Memphis Depay stealing possession and racing clear into the penalty area where his low cross led to a Kyle Walker own goal.

The former Everton defender was also out-muscled by Matthijs De Ligt as the Dutchman equalised with a header during the second half and played Ross Barkley into trouble ahead of the third goal.

Here, Press Association Sport takes a look at the background to Stones’ season.

Stones was not always first choice in the City defence for manager Pep Guardiola, with 20 Premier League starts and often a squad player in key matches.

Frenchman Aymeric Laporte was regularly deployed alongside Vincent Kompany when the veteran Belgian was fit, with Nicolas Otamendi another option.

Stones came on as a late substitute in the 6-0 FA Cup final win over Watford at Wembley – having been left to watch on from the bench as City were edged out by Tottenham in their key Champions League semi-final second leg.

Official Premier League statistics from the 2018-2019 campaign show Stones had a 69 per cent tackle success rate, with 14 interceptions and 60 clearances.

Perhaps the most crucial one came during the showdown with title rivals Liverpool at the Ethiad Stadium in January, when he somehow hooked the ball from the line after his clearance had bounced back off City goalkeeper Ederson and looked set to loop into the net.

The Goal Decision System showed ball was just 11 millimetres from crossing the line – the narrowest of margins helping his team en route to retaining the Premier League title by just a point.

Stones also managed 114 recoveries and won 88 out of 134 duels, while producing 103 “accurate long balls”. Just a shame he could not find another one when the heat was on in Guimaraes.

At the 2018 World Cup last summer, it was Stones who switched off as Mario Mandzukic got goal-side in the penalty area to put Croatia into the final with his extra-time strike.

In his latest England appearance, Stones was again caught out of position when he lost De Ligt at a corner as the Dutch defender powered a header past Jordan Pickford to equalise.

Whether it was lack of confidence in his own ability or just another lapse in concentration trying to do too much on the ball which allowed former Manchester United frontman Depay to capitalise, only Stones will know.

However, with lots of questions to answer and plenty to prove heading into the next campaign and qualifying for Euro 2020, at least the England manager has his back.