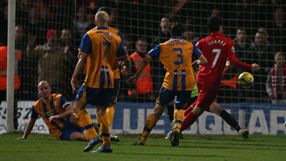 Suarez's goal, aided by a clear handball, against plucky minor league opponents Mansfield Town in a third round tie brought accusations of cheating against the Uruguayan.

Liverpool manager Brendan Rodgers staunchly backed his player and even Mansfield boss Paul Cox said it had been "instinctive" and Suarez had not done anything wrong in the 2-1 away win.

The handball was judged accidental by referee Andre Marriner and his assistants but Suarez, banned for eight matches last season for racially abusing Manchester United's Patrice Evra, was again greeted by unwanted headlines on Monday.

"Caught red-handed again", "cheated" and "Suarez 'stole our FA Cup glory'" were just some of the accusations laid at the striker's feet.

Suarez was also pilloried for a handball on the goal-line that prevented Ghana's Dominic Adiyiah from scoring a winner in the last minute of a 2010 World Cup quarter-final.

Suarez, then an Ajax player, was sent off but Asamoah Gyan missed the penalty - and Uruguay triumphed in the shootout after extra time to make the semis.

Unabashed, Suarez said he had usurped Diego Maradona by pronouncing "the hand of god now belongs to me".

Just how honest should sportsmen be on the field of play? Is it up to the match officials to spot incidents of cheating or must players own up when they clearly know they have gained an advantage from an infringement?

Former Liverpool defender Alan Hansen, in his column in the UK's Daily Telegraph newspaper, said no footballer would ever ask a referee to disallow his goal, by whatever means it came by, and opined that the "outrage" was in part down to Suarez now being an "easy target".

"What exactly was Suarez supposed to do? Run to the referee and tell him it hit his hand? His team-mates would go berserk and his manager would not be too impressed either," Hansen wrote.

He added: "From Suarez's reaction, he expected it to be disallowed and when it was not, he has decided to get on with the game. It is not like he ran off celebrating. He did exactly what anyone who has ever played professional football - and anyone who plays in the future - would do in the same situation."

Suarez's goal revived memories of France's controversial World Cup play-off victory over Ireland in Paris in 2009 when Thierry Henry handled the ball before setting up William Gallas's winner that put the French through to the 2010 finals.

The striker later acknowledged he had handled but absolved himself from blame when he said: "I'm not the ref. I played it, the ref allowed it."

Some sports have a reputation for honesty more than others.

Golfers routinely penalise themselves for rule infringements, as do snooker players, but there is no such thing as a perfect world.

In other sports, a reputation for upholding the spirit of the game does not always make you popular.

Former Australia cricketer Adam Gilchrist was renowned for his honesty at the crease, walking [bac