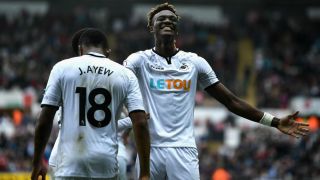 Tammy Abraham scored both goals as Swansea City recorded their first home win in the Premier League this season, defeating Huddersfield Town 2-0 at the Liberty Stadium on Saturday.

The Welsh club had lost three from three in front of their own fans but benefited from two fortunate breaks to pick up a much-needed victory that lifts them out of the relegation zone.

A shocking pass from goalkeeper Jonas Lossl allowed Tom Carroll to set up Abraham - who also scored twice against Huddersfield in the Championship last season when on loan at Bristol City - to grab the game's crucial opening goal in the 42nd minute.

Aaron Mooy's sliding tackle inadvertently teed up the striker's second early in the second half, Abraham tapping home from virtually on the line to take his tally for the campaign to five in all competitions.

While the hosts welcomed the help, Huddersfield will hope their luck changes in the near future. They have now gone six games without a victory, while a miserable trip to south Wales was compounded by the loss of Philip Billing through injury.

44: Huge mistake by Lossl gives the a gift. slides the ball across goal and does the rest! October 14, 2017

In the first meeting of the teams since they were League One rivals nine years ago, Swansea started brightly.

Leroy Fer made an immediate impact on proceedings, picking up a booking - his fifth of the season - inside two minutes for a shoulder charge that knocked over Lossl, who was grounded again soon after to turn away a stinging drive from Abraham.

Yet for all their early exertions, Swansea were fortunate not to fall behind when Tom Ince met Rajiv van La Parra's teasing cross with a half-volley that carried plenty of power but severely lacked any sort of placement.

Ince was involved again when a shoulder-to-shoulder clash with Martin Olsson prevented the winger reaching Lossl's pinged clearance down the middle. Huddersfield's appeals fell on deaf ears, however, as referee Paul Tierney dismissed calls for a foul that surely would have resulted in a red card, too.

Still, Lossl's right boot was involved in the opening goal, as his misplaced pass gave the ball to the alert Carroll, who accepted the surprise gift to tee up the advancing Abraham.

Having scored three minutes before the break, the on-loan Chelsea frontman added another three minutes into the second half to give Swansea some breathing space.

Once again they required some help from their opponents; Mooy - on as a half-time substitute - perfectly timed a tackle on Luciano Narsingh just outside the penalty area, only for his challenge to put the grateful Jordan Ayew in the clear.

A delicate chip over the advancing Lossl was heading for the net but Abraham made absolutely sure.

Huddersfield – who saw Billing depart on the hour with a non-contact injury to his lower right leg – failed to even manage a first away league goal since the opening day of the campaign, Van La Parra coming the closest when his deflected shot from the left clipped the crossbar and flew over.

This, though, was Swansea's day. After a tough start on their own patch, Paul Clement's squad can bask in the comfort of a home win at last.