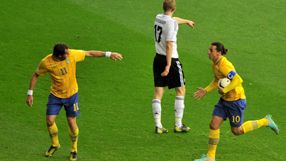 In one of the greatest Swedish sporting comebacks, Sweden came from 4-0 down to draw 4-4 in Germany in Group C on Tuesday.

"Business is business. I do not think anyone could have predicted how the situation would develop," TV4's head of football Emir Osmanbergovic told newspaper Aftonbladet.

"With the game fresh in the memory it feels particularly hard, but rights come and go. We and other channels will continue to buy and sell rights. Sometimes you're lucky, like we were with the French league, sometimes you have bad luck."

Over 1.2 million viewers from a nation of almost 10 million tuned in to see the Swedes come back from the dead against the Germans, with Rasmus Elm netting a dramatic late equaliser to snatch a valuable point.

"These figures are bizarre, magic. But they are justified in terms of what a great game it was," Kanal 5 spoksman Dan Panas told media website Resume.