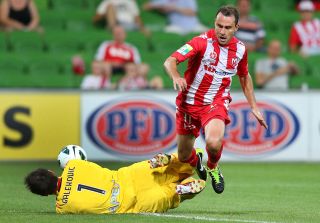 After missing the finals last season, coach Frank Farina has swept a broom through his Sydney squad, with nine players heading out and seven new faces joining the club.

While confident the re-jigged Sky Blues squad can be a force in the competition, Garcia believes it will take time for the side to hit their straps.

"Hopefully we can get off to a good start," Garcia said ahead of Friday night's season opener against Newcastle

"(But) we're still gelling as a team and still figuring out how each other plays.

"It might take some time ... but we're pretty head strong. We've got a good group here so we're fired up for round one.

"We want to start with a bang and win every game, especially at home.

"We want to be more consistent, that's something we lacked last season so this season it's been something that's been in our minds to make sure our home form is very good."

The Sky Blues have been hit by something of an injury crisis heading into the Jets clash with Terry Antonis (quad), Peter Triantis (osteitis pubis) , Terry McFlynn (groin), Pascal Bosschaart (Achilles), Corey Gameiro and Tiago Calvano all unavailable.

Socceroos midfielder Brett Emerton also failed a late fitness test on his injured back and will also be forced to watch from the sidelines.

"It's been tough but that's why we've got good squad depth and everyone that comes in is more than capable," Garcia said.

"That's a problem for the coaching staff, there's a lot of competition for places.

"Some guys a getting a chance now and it's a fantastic thing to have at a club, especially when you do get a few injuries."

It remains to be seen where Farina opts to deploy the versatile Garcia, with the ex-English Premier League star equally comfortable in attack or in central or the right in midfield.

Asked his goals for the season, the former Melbourne Heart attacker said: "Just to do better than last year.

"I want to score more goals, be more creative and to play finals football.

"We've got a good bunch of guys here, they've all taken me in so it's been good."