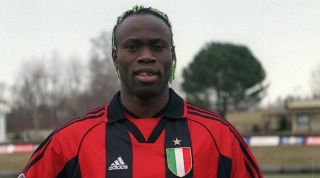 Former Nigeria defender Taribo West claims he was forced to leave Milan because of the mafia in Italy.

After four successful years at Auxerre, West moved to Inter in 1997 and won the UEFA Cup in his second season alongside the likes of Ronaldo, Alvaro Recoba, Diego Simeone and Javier Zanetti.

He was surprisingly sold to crosstown rivals Milan in December 1999 after falling out of favour during Marcello Lippi’s time in charge of the Nerazzurri.

However, the former centre-back only ever made four appearances for Milan and was loaned to Derby just a few months later, although he claims he came close to joining Liverpool instead.

And West has now revealed that Italian mobsters were at the root of his sudden departure from San Siro, which came about because of his inability to dislodge club legends Franco Baresi, Alessandro Costacurta and Paolo Maldini from the side.

“The Mafia would do anything in their powers to make sure I was done away with at Milan,” he told Score Nigeria.

“They cooked a vicious story in the press that I was injured in the desperate bid to send me out of Milan.

“The doctors were bribed to say I was injured, but it was a lie. They did that because they felt it was unthinkable for an African player to take the place of those three ageing defenders.

“Liverpool came with an offer, but at the end of the day I had to settle for Derby County.”

After his time at Pride Park, West went on to represent Kaiserslautern, Partizan, Al-Arabi, Plymouth and Iranian outfit Pakyan, before hanging up his boots in 2008.

The defender won 42 caps for his country and played for Nigeria at the 1998 World Cup, having won Olympic gold in the United States two years earlier.