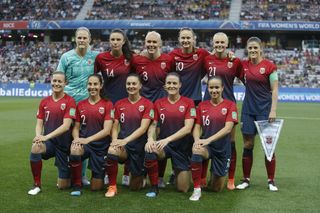 England play Norway in Le Havre on Thursday for a place in the semi-finals of the Women’s World Cup.

Norway reached the last eight for the first time since 2007 by beating Australia on 4-1 on penalties in their last-16 clash on Saturday.

Here, Press Association takes a closer look at England’s opposition, who are 12th in FIFA’s rankings, nine places below Phil Neville’s side.

Swede Martin Sjogren, 42, had just won the Swedish title as manager of Linkoping when in December 2016 he was named as a surprise replacement for Even Pellerud, who had guided Norway to World Cup glory in 1995. Sjogren’s first major tournament was a disappointment as Norway crashed out of Euro 2017 in the group stages without scoring a goal. But they bounced back to finish top of their World Cup qualifying group by beating Holland in their decisive match.

Caroline Graham Hansen has been one of the tournament’s leading players so far. The Barcelona winger, who scored a penalty in Norway’s group win against South Korea, has showcased her dribbling ability at pace and crashed a shot out of nowhere against a post in their last-16 win against Australia. Striker Isabell Herlovsen, plus midfielders Guro Reiten and Ingrid Engen are also on top of their game.

Norway put their disappointing Euros display behind them to finish top of their World Cup qualifying group and have maintained their momentum in France. Group wins over Nigeria and South Korea sandwiched a narrow defeat to the hosts before Sjogren’s side held their nerve in Saturday’s last-16 clash with Australia, serving up a penalty masterclass in a shootout win, with all four spot-kick takers scoring after the game had ended 1-1 at the end of extra-time.

Ada Hegerberg, winner of the inaugural women’s Ballon d’Or in 2018, has refused to play for her home nation since the 2017 Euros in protest at how she perceived women footballers were being treated in Norway. The Lyon striker, 23, quit international football just months before the Norwegian Football Association (NFF) and the nation’s players’ association (NISO) signed an historic equal pay agreement.