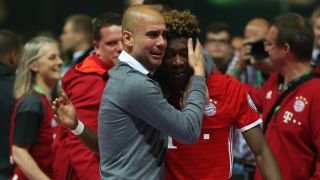 Pep Guardiola described his three-year reign at Bayern Munich as "outstanding" after the DFB-Pokal final victory over Borussia Dortmund.

Bayern won 4-3 on penalties after extra time finished with the scores level at 0-0, as Manuel Neuer's save from Sven Bender and Sokratis' spot-kick against the post made the difference.

The victory ensures Guardiola finished with a double before he moves to Manchester City, with the head coach in tears at the final whistle and during the trophy celebrations.

"I had an outstanding time working here," he told ARD. "I wish Bayern only the best for the future.

"I'm glad it finished in this way - we are very satisfied. I will miss my players.

"BVB had momentum, but the momentum we had was bigger and longer. Dortmund had chances, but we had our own opportunities.

"All the players were tired at the end and in a penalty shoot-out anything can happen."