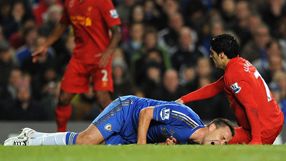 "The good news is that Terry has been training and we are considering playing him for the Under-21s on Thursday, we will have to see how he feels," interim manager Rafael Benitez told a news conference on Tuesday.

"It will be a different kind of game, but if he is OK and can train the day after, at least we can start considering him as an option. Hopefully he can play some minutes in the short-term," added the Spaniard.

"It's a positive as before he was just doing the warm up, he's getting closer but it depends on his reactions."

Cech has missed the last two matches with a leg injury.

Terry, 32, injured his knee against Liverpool in his first match back after serving a four-game ban for racially abusing Queens Park Rangers defender Anton Ferdinand and was initially expected to be out for three weeks.

The controversial skipper has yet to feature for the European champions under Benitez, who took over 10 hours after the sacking of Roberto Di Matteo in November.

Chelsea are fourth in the Premier League, 14 points behind leaders Manchester United but with a game in hand. Their next league game is at Stoke City on Saturday.