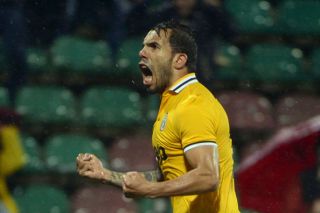 Tevez, who joined Juventus before the season from Manchester City, has been vital to the Italian club's third straight league championship, scoring 19 goals in 31 appearances but the 30-year-old Argentine almost missed the decisive match of Serie A on Sunday.

With Juventus set to play Atalanta on Monday, Tevez had planned to have a nap but was woken up by his team-mates to watch Roma lose on the island of Sicily.

"Actually I was sleeping, trying to get some rest before tomorrow's game but the tension inside the hotel was quite palpable among my team-mates," Tevez said.

"In the end I have only managed to sleep 30 minutes.

"Then I woke up, watched the game, but to be honest I didn't really expect to celebrate in the hotel until tomorrow after the game against Atalanta.

"At least now we can celebrate and relax a little bit."

But, while Tevez had expected Roma to defeat Catania, which would have meant Juventus needed one more victory to secure the league title, the Argentine conceded he considered the championship wrapped up after last week's triumph at Sassuolo.

"I think that after the game won against Sassuolo last Monday we realized we had done it," Tevez said.

"After winning 3-1 coming back from one goal down, we thought that we had won the league."

Tevez and his team-mates became just the second Juventus team to win the Serie A three seasons in a row, following on from the side that won five straight titles from 1931-35.

"We made history and it's really incredible," the striker said.

"It's a fantastic achievement. I am really really happy to claim this title."