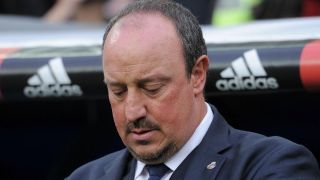 Here, we take a look back at the events that led to the Spaniard being replaced by Zinedine Zidane at the Santiago Bernabeu:

June 3: Benitez is appointed as the man to replace Ancelotti, signing a three-year contract, and vows not to change his typically conservative approach.

July 23: First cracks start to show as rumours emerge of a rift between Benitez and Ronaldo after the coach disallows a goal in training. The coach responds: "My relationship with him is good. When someone gets angry during a training session, but then does their job, there's no problem, it's fine."

August 4: Ronaldo misses the Audi Cup, leading to further reports of a rift between star player and head coach. Benitez says the Portugal international's absence is down to a back injury.

August 23: Benitez's first Liga game in charge of the club ends goalless against newly promoted Sporting Gijon. James Rodriguez is benched, with Benitez again having to fend off rumours of a fall-out with one of his stars.

September 19: Despite a 1-0 victory over Granada, home fans at the Santiago Bernabeu whistle the team and coach for their pragmatic display. A similar reception is afforded to the side as they draw 0-0 with Malaga a week later.

October 4: With victory in the Madrid derby in sight, Benitez replaces Karim Benzema with midfielder Mateo Kovacic. The move backfires as Atletico Madrid score late to earn a 1-1 draw.

October 16: After denying more reports of a fall out with Rodriguez, Benitez suggests there are people trying to destabilise Madrid with talk of player rifts.

October 20: For the third time in as many months, the Spaniard rubbishes reports of a row with Ronaldo.

November 8: Despite taking the lead, Madrid slip to their first defeat under Benitez as Sevilla come from behind to win 3-2.

November 21: Madrid suffer second loss in a row as they are swatted aside by Barcelona 4-0 in the Clasico. A furious Bernabeu crowd greets the performance with a panolada - the classic waving of white handkerchiefs to express disapproval.

November 23: Amid speculation the 55-year-old will be sacked, president Perez calls a news conference to give the coach his full backing despite their Clasico humiliation.

December 1: Still the talk of player unrest plagues the Benitez tenure, and the coach is again forced to deny speculation Rodriguez is growing increasingly unhappy with a bit-part role at the club.

December 13: A third defeat of the Liga campaign – 1-0 against Villarreal – sees Madrid slip five points behind leaders Atletico and four behind Barca.

December 24: Despite a 10-2 win over Rayo Vallecano the previous weekend, Perez is forced once again to call for unity within the Madrid ranks, from the players, fans and staff as they prepare for the second half of the season.

January 4: After a crazy 2-2 draw at Mestalla, that sees Madrid cough up a late lead to Valencia, Madrid confirm Benitez's departure after less than half a season in charge.